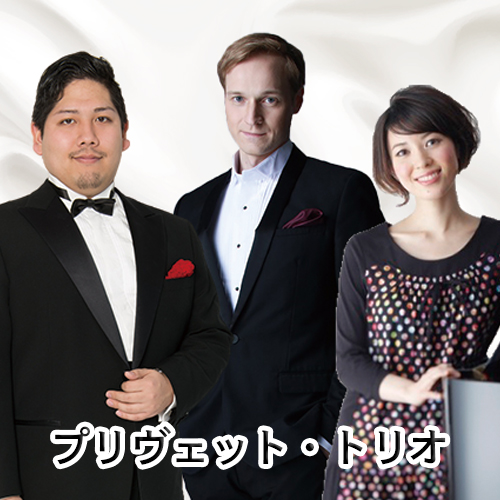 The two opera singers, deliver you powerful and unique voices, with the support of the piano, which cannot fail to touch everyone!
※In Russian, "Privet" means hello.

Kazuma Kudo (Tenor)
Born in Iwate Prefecture. Graduated from Tokyo University of the Arts. Received the 2nd prize (vocal section ) of the 84th "Music Competition of Japan" . Received the 1st prize of the 53rd "Nichii Seigaku Concorso" as well as the song award (Takiko Okabe, Sadako Mine Award).

Vitaly Yushmanov (Baritone)
From Saint Petersburg (Russia). Studied at the the Mariinsky Academy of Young Opera Singers. Received the 2nd prize of the 14th "Tokyo Music Competition" in the vocal section and the 1st prize of the 52th "Nichii Seigaku Concorso" as well as the Best Song Award.

Hiroko Kohno (Piano)
From Hokkaido. Graduated from the Toho Gakuen School of Music. Dubbed the hands and sounds of the protagonist (Actress Juri Ueno) in the drama "Nodame Cantabile" and provided guidance during the shooting. Currently pianist at the Nikikai Opera Training Institute. 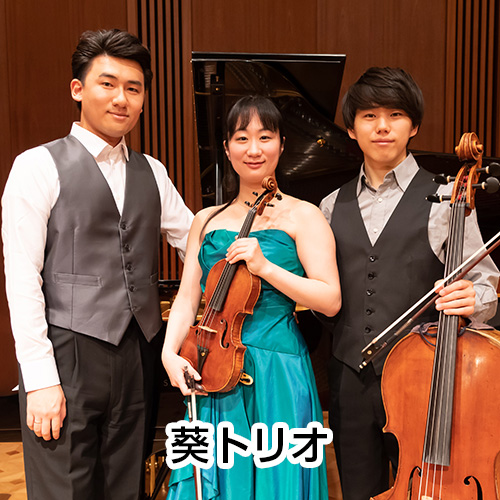 Aoi Trio is becoming one of the most promising chamber music ensembles in their age after receiving the first prize at the prestigious 67th ARD International Music Competition in Munich, 2018.

Aoi Trio is becoming one of the most promising chamber music ensembles in their age after receiving the first prize at the prestigious 67th ARD International music competition in Munich, 2018. Aoi Trio was founded in 2016 at Tokyo University of the Arts by violinist Kyoko Ogawa, cellist Yu Ito, and pianist Kosuke Akimoto after receiving 2 years course of Suntory Hall’s Chamber Music Academy program.
“Aoi” refers to the initial letters of their individual family name and is also a name of a flower in Japanese which has the meaning of “aspiration” or “fruitful” as its flower language. They have received number of praises for their performance in the ARD competition and for their recital at Suntory Hall in December 2018. They have performed in many cities around the world including Tokyo, Nagoya, Sapporo in Japan, and in Munich, Bayreuth, Baden-Baden, Cologne, Hitzacker Summer Music Festival in Germany. For the highlight of this season, Aoi Trio is invited to play at numerous concert venues including The Phoenix Hall, Biwako Hall and Regensburg. Additionally, they are scheduled to perform Beethoven’s concerto with Sapporo Symphony Orchestra in 2021.
In 2019 Aoi Trio released their first recording including works by Haydn and Schubert, an album which was highly recommended in several music medias. In the same year, the trio received Aoyama Music Award and Nippon Steel Music Award for their accomplishments in their broad activities and for their promising future. They have received musical inspirations and guidance from Kei Itoh, Kenji Nakagi, Wakako Hanada, Koichiro Harada, Masafumi Hori, Katsuya Matsubara and Nobuko Yamazaki. Since April 2019, they are based in Germany and currently studies with Dirk Mommertz (Faure Quartett) at the University of Music and Performing Arts Munich along with lessons under Vincent Coq (Trio Wanderer).
Official site : https://aoitrio.com 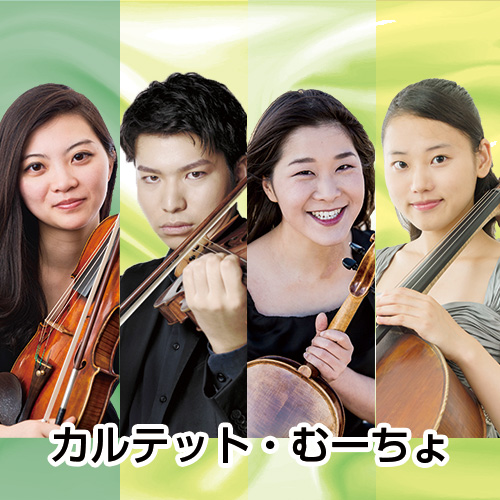 Master of strings as expected from young generation

Shunichiro Fukuda (Violin)
Won the 1st Prize and Grand Prix of the 1st Yokohama International Music Competition for junior high students. Received the 3rd prize of the 66th "Student Music Concours of Japan" and the 3rd prize of the strings division in the 11th "Tokyo Music Competition". Graduated from the Tokyo University of the Arts and in 2020 completed the master's courses.

Saki Ishida (Viola)
Graduated from the Tokyo University of the Arts and completed the courses of the Mozarteum University Salzburg. At the university, received the Graduate School Acanthus Music Award.
Won the semi-finalist award of the 13th "Lionel Tertis International Viola Competition" and received the Special Award. Currently sub-chief of the viola section in the Tokyo Metropolitan Symphony Orchestra. 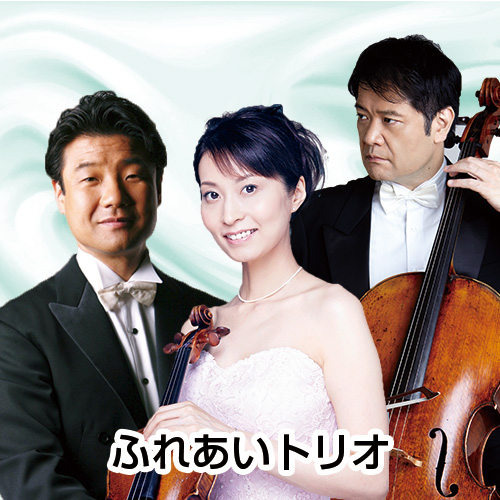 Trio composed of violin, piano and cello for the most attractive formation of chamber music. Enjoy the sound of skills with this trio active for more than 18 years!

Kyoko Yoshida (Violin)
After graduated from Toho Gakuen University, studied abroad at the Guildhall School of Music and Drama in London and at the Manhattan Conservatory in the USA.
Studied under the master Aaron Rosend. With Fureai Concerts, which aims to contribute to society, has performed more than 480 times in 16 years in order to deliver the richness of music to all over Japan.
Every summer, serves as chairman for the project YEK (Young Ensemble Academy in Karuizawa). Also part-time lecturer at Toho Gakuen College of Art.

Genichi Watanabe (Cello)
Graduated from Toho Gakuen College and in 1993 graduated from New York Juilliard School. After studying at Indiana University in the USA, came back to Japan in 1995. Currently, member of the Yomiuri Nippon Symphony Orchestra.

Mitsutaka Shiraishi (Piano)
After the graduation from Tokyo University of the Arts, improved skills at New York Juilliard School. Received the Kinoshita Award (co-star) for the outstanding performance of Japanese songs during the 63rd "Japan Music Competition" in the Vocal Music Division.
Currently part-time instructor at the Piano Department of the Tokyo University of the Arts and at Ochanomizu University.

In addition to them, we also get the support and cooperation of local companies at each "Fureai Concert" venue.